Life of a Coptic Sock

Due to a request for more historical information, I decided to present some research on the sock to the group. I feel much more at home with historical / archaeological data!

Egypt in 4th-5th Centuries CE
Hawara, the place where the sock was found, is a good example of Egypt as a Greek occupied land under Roman rule – mixture of Greeks, Romans and Egyptians. 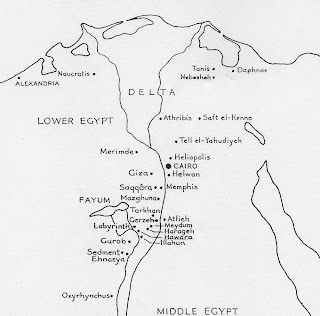 Map showing the Fayuum area and the town Hawara where the sock was found.

The sock comes from a period of transition in terms of Empire and traditions - Roman Empire moved to Byzantine (though Egypt was never never truly Byzantine – political rule in name only). It was also moving from a predominately pagan world to a mostly Christian one. Graeco-Roman transition into Coptic. Some times known as late antique Egypt. It was a complex and developed society.

The dominant material for clothes in late antiquity was wool. Good quality clothing was a way of storing wealth. There are laundry lists in papyri that list items such as a chiton or tunic, cloaks, mantles, shoes, sandals and pants.

Much clothing was made at home, though there was also a considerable textile and clothing industry. References to the making of clothes are generally found in references to the raw materials such as linen and wool (fleece).

The textile industry was a major employer in some cities and production, such as washing, carding dyeing, fulling and spinning, could be in the hands of specialised workers. In the country this was more likely to be done in the household. This was based on Egypt’s production of flax and on large flocks of sheep.

The predominant use of flocks in late antiquity was for the production of wool and sheep became more important and thus more valuable. Flocks generally were based around the Nile Delta in the green oases surrounded by desert – the Fayuum was particularly important.

A single brown woollen sock possibly from the collection of Amelia Edwards and a gift to her from Flinders Petrie from his excavations in Hawara 1888/9. It was therefore (possibly)a founding part of the Petrie Collection. 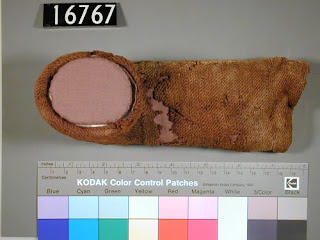 It is turned inside out – there was a practice of placing recently washed and worn garments in the tomb inside out. Often the garment worn by the person at death was washed and put in the tomb for transportation into the afterlife. 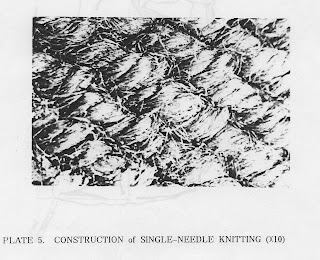 Conservation work was carried out on the sock in 1994. This is a photo before from the report made at the time: 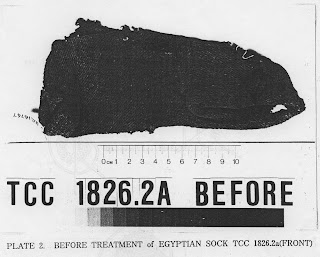 Big holes in sock and some unraveling, probably due to insect attack. Deteriorating by aging due to light since sock was excavated. 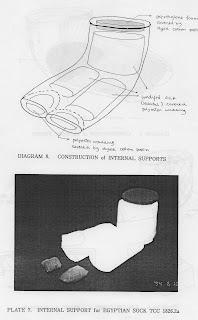